(From the Board for Certification of Genealogists)

"Proof is a fundamental concept in genealogy. In order to merit confidence, each conclusion about an ancestor must have sufficient credibility to be accepted as "proved." Acceptable conclusions, therefore, meet the Genealogical Proof Standard (GPS). The GPS consists of five elements:

We use the Genealogical Proof Standard in all our client research: 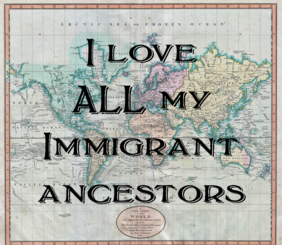 We are a nation of people whose ancestors have come here from all over the world leaving everything they had ever known and risking their lives to make a new life in this country. At times in our history people have felt the need to hide their ethnic identities and be “American” but the truth is, only Native Americans can claim that label. Everyone else came here from somewhere else– and often on a boat!

Often looking at history can explain your ancestors’ decisions to move across continents and oceans to begin their lives again in a new place. Wars, famines, religious persecution, the simple desire for a better life often give us clues as to the “why” of their journey. Many people emigrated using tried and true paths and methods of travel that people from that same city, village, or family had already used, often going to the same state or county where they knew people or knew of possible work.

Our online searches – even for those people who came here from outside the continental United States – often lead us to a network of other researchers who are also researching your same ancestors and other family members. Their findings can provide clues through their source citations, and sometimes they have photos they are willing to share. Census records show, for example, who a family’s neighbors were and often their street address. Other resources such as WWI Draft Registration records, passport applications, and naturalization records reveal important information – often the names of parents and where they were born.

Your mother may have told you that you had cousins in Chicago – perhaps you now wish she’d been a bit more specific. However, once you learn about these marvelous people who make up your family's "tree" starting back on another continent, you'll often find wonderful stories here in the U.S.,  as well as perhaps those mysterious cousins!

It can often be as challenging to follow the paths of ancestors after they came to this country as it is finding out where they came here from – Europe, the British Isles, Asia or Africa. It's not uncommon to find an ancestor's village in Eastern Europe and follow them across the ocean only to lose them in Pennsylvania! But resources are everywhere and more possibilities emerge almost every day.

So even if you think you don’t have much to go on, that’s often far from true.  Contact us  to find out more.